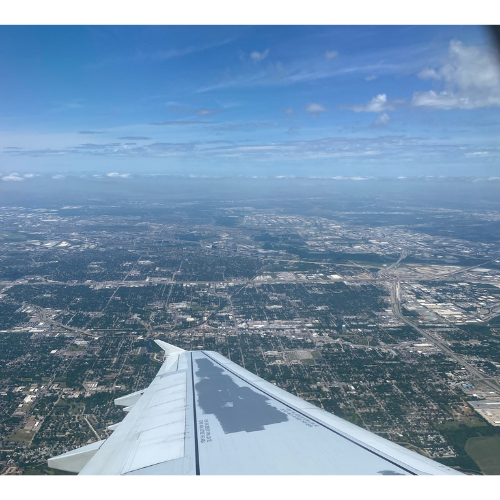 Last week, I got to attend my first conference as a full-time employee at Kuzneski Insurance Group. I don’t have a specific title – I'm currently a “Jill” of all trades – helping where needed and learning what feels like a million new things. It’s honestly super exciting, and I’m not sure I could get that type of experience elsewhere (it helps the days go by faster, too!). This conference was a great event to learn even more and expand my network, all while having fun!

Who: TRUE Network of Advisors

The TRUE Network of Advisors (TRUE) is a non-competing, nationwide, exclusive group of 65 benefit consulting firms - and we’re one of them! TRUE emphasizes collaboration, which allows members to share best practices in all aspects of the business.

While TRUE does host conferences that are great for clients and prospects, this event was catered more toward the member agencies and their employees with a focus on account management and sales.

Wait, where? About 22 minutes northwest of Dallas, if that’s important to you. It’s a very commercial and corporate city with lots of greenery and a man-made lake.

But what did you actually do?

The first conference event was an opening reception Sunday evening. We flew in Saturday night, so we had all day Sunday to explore the area. It started with a 2-hour walk around the lake. During the walk, we came across a kayak rental stand. We booked a 2-hour kayak for after lunch.

Speaking of lunch, you have to believe me when I tell you that the best poke bowl I’ve ever eaten was in Irving, Texas. 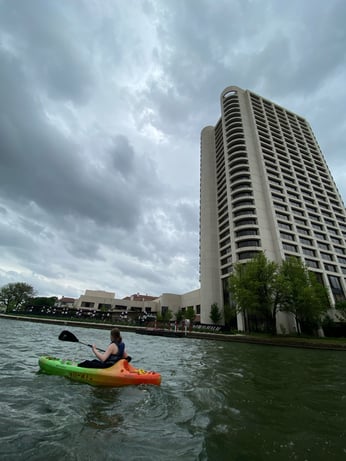 Just a few minutes from the hotel, Go Fish Poke had a create-your-own-bowl option starting at $14. They let you load it up with two types of fish and a whole bunch of free toppings. It was so big, though, that I couldn't finish it all (what’s the saying about the size of things in Texas?) but I’m no amateur - I ate all the fish and left the rice.

The kayaking was a blast, but difficult. Irving was a surprisingly windy place, which created some small "waves."

Also important to mention: For at least 45 minutes we were rowing against the wind, the kayaks were bouncing, and we were getting spritzed in the face by (probably dirty) lake water. Have you seen that reality show with the people who work on a crabbing ship? You always see the clips of the crabbers on the hull getting pelted with water while trying to do their job – that's what the experience felt like. But it was fun and exhausting and invigorating – and I still have the blisters on my thumbs to prove I rowed for 2 hours.

I was nervous for the opening reception, which was really just a networking session with an open bar. I don’t love networking - it doesn’t come naturally to me - but I know it’s important for any job, really. (I’m not sure if I’m an introverted extrovert or an extroverted introvert.) I managed to make it through the event unscathed and met some pretty cool people.

The morning started with more networking (😳) before the keynote, Sangram Vajre, spoke about the idea of “belongship,” his new proposed word for leadership that focuses on fostering a sense of community. Next were breakout sessions, followed by some peer presentations and – more networking. The evening ended with a reception networking event on the lake-side lawn (pictures below). We were taken to dinner with a large group of other members by one of the TRUE strategic partners at an incredible restaurant called Mexican Sugar. It was served buffet style and, yes, I overate. 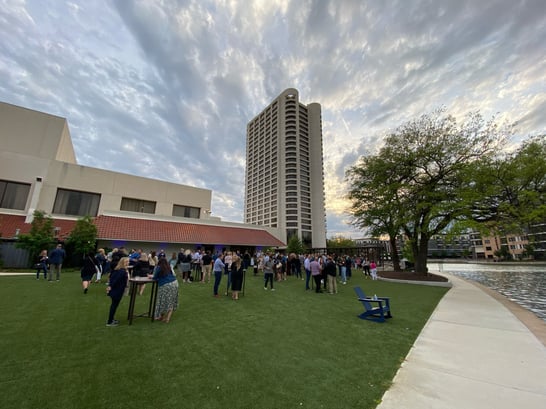 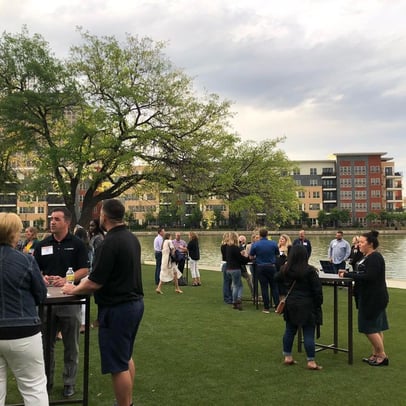 This day had more breakout sessions led by our peers, and presentations on employer compliance and the Canadian benefit market, since we now have a member agency in Canada. The session ended about an hour earlier so that everyone had time to change into their costumes for the ’80s-themed wrap party, which was in a penthouse club across the lake from the hotel. The (apparently extremely famous) ’80s cover band, The Molly Ringwalds, performed after sunset. I was in bed by 11 – which is rather early for this crew – since we had to fly out the next morning. Apparently not everyone turned in so early. Let’s just say I saw multiple people wearing sunglasses in the lobby Wednesday morning... 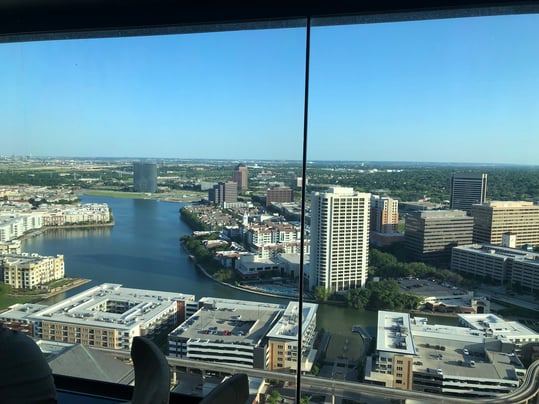 The view from the penthouse club

I swear no one paid me to say that. I actually had a sneaking suspicion that this was the case based on some fascinating conversations I’ve had with my parents, Laurie and Andy Kuzneski (KIG’s Director of Client Development and President, respectively). And my parents aren’t the only ones in the game who are innovative and always looking for the best and most creative solutions for their clients. And who knew people in the insurance business could be so fun? Or maybe it’s just the cocktails talking.

Pro tip: Make sure your LinkedIn page is up to date!

Certain people will get a list of attendees before the event, and you may even receive a list of everyone who’s in attendance while you’re there. This means that even people you didn’t meet at the conference can look you up! Care to guess whose LinkedIn page hasn’t been updated since 2020 and had 34 people look at their profile following the event?

Something I’m proud of: All the networking I did!

By the last evening I was honestly crushing it. But my feelings for networking are still 😳

Claire is a recent graduate of the University of Pittsburgh with a BA in Nonfiction Writing and minor in Hispanic Language & Culture. She enjoys cooking, taking and developing film photos, drinking Prosecco, and practicing yoga. When she's not in the dark room or taking care of her 20+ house plants, she's KIG's Jill of all trades: a little writing, marketing, finance, HR, process development ... need we say more?